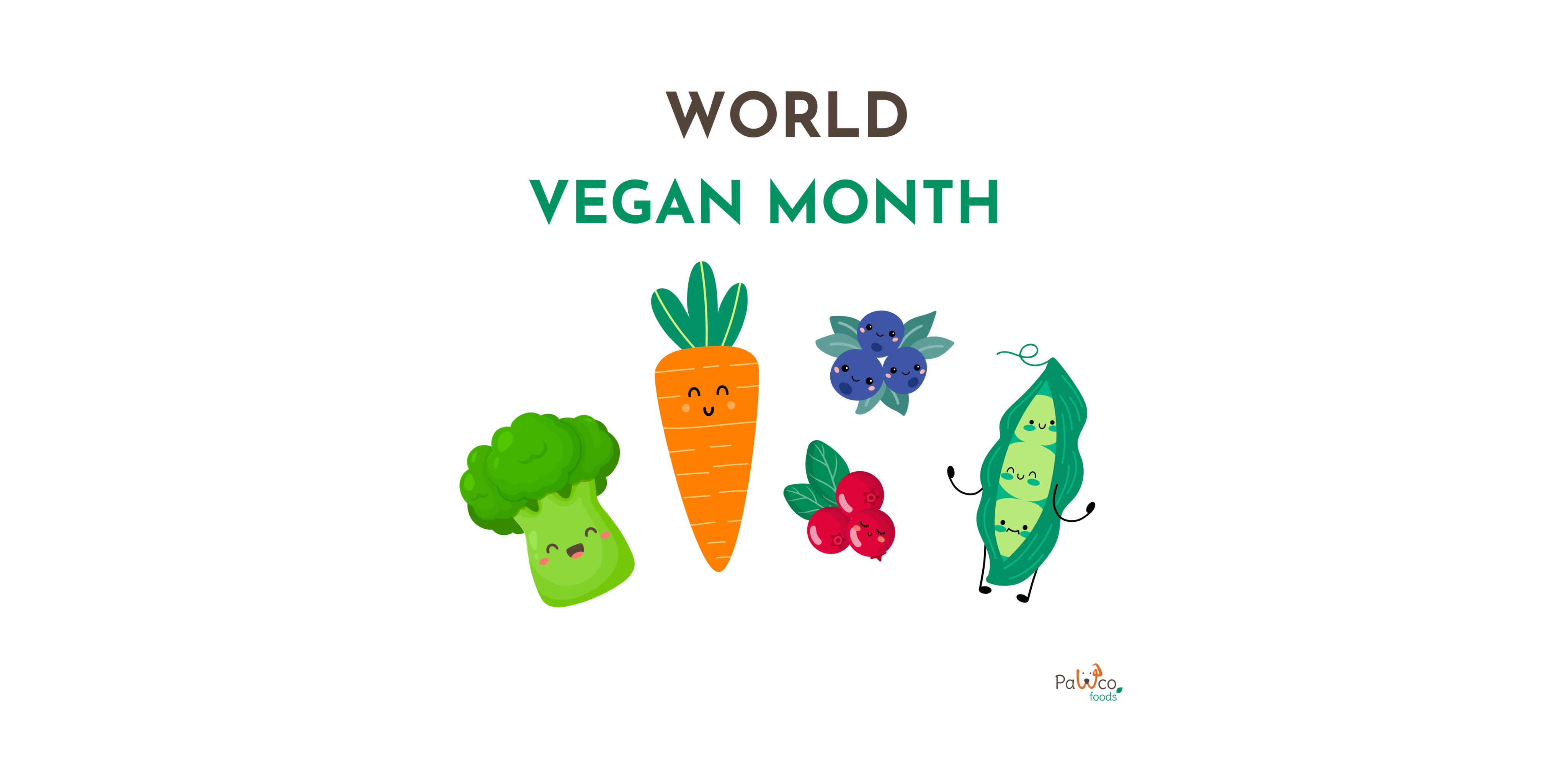 Every November, we commemorate World Vegan Month! It’s an opportunity for all of us to celebrate veganism, the vegan diet, and all of the benefits that come with the decision to avoid consuming animal products for both our four-legged companions and us humans.

World Vegan month started as only one day, World Vegan Day. It was founded by The Vegan Society, the world’s largest vegan charity, on its 50th anniversary on November 1st, 1944. World Vegan Day is still celebrated on this day, but the celebration has since extended to an entire month! During this month, you’ll likely see more vegan products promoted in shops, grocery stores, restaurants, and cafés. You may also come across campaigns advocating for veganism and flyers or articles (such as this one!) explaining the benefits. So, let’s get to it – what is veganism, what is a vegan diet, and what are the benefits?

According to The Vegan Society:

“Veganism is a philosophy and way of living which seeks to exclude – as far as is possible and practicable – all forms of exploitation of, and cruelty to, animals for food, clothing or any other purpose; and by extension, promotes the development and use of animal-free alternatives for the benefit of animals, humans and the environment. In dietary terms it denotes the practice of dispensing with all products derived wholly or partly from animals.”

Following a vegan diet means committing to not consuming any food items that contain ingredients obtained from animals. This includes meat, fish, poultry, eggs, and milk, as well as products that may be less obvious to some, such as honey, some beers and wines, and gelatin-based candy. However, being vegan entails more than just following a vegan diet. Vegans are committed to not using animal products – including fashion products like leather and suede, beauty products that include animal-derived ingredients, etcetera.

What about the advantages?

To begin with, it saves a lot of animals! The estimations regarding how many lives you could save by going vegan vary. According to a study by the non-profit organization Animal Charity Evaluators, you could save over 100 animals annually. PETA puts the number closer to 200 per year, and Counting Animals calculated 404 animals saved per person and year! No matter the exact number, one thing is clear: the higher the number of vegans, the fewer animals will be forced to endure the traumatic experience of being raised in an animal farming environment. Animals’ living conditions in the meat industry are often deplorable, and the sector contributes significantly to environmental issues such as deforestation and pollution.

How about our furry friends?

In addition, a vegan lifestyle and diet come with a whole bunch of health benefits! Humans can enjoy a lower risk of cancer, diabetes, and heart disease by choosing not to eat animals. And did you know that our furry family members can reap the benefits of a plant-based diet as well? Contrary to popular belief, dogs are not obligate carnivores like their wolf ancestors. They have evolved into omnivores, fully equipped to thrive without meat! In fact, according to a study at the University of Guelph, a vegan diet could extend your pup’s expected lifespan by up to 18 months. According to Dr. Andrew Knight, Professor of Animal Welfare and Ethics at the University of Winchester Centre for Animal Welfare, a vegan diet may be the best choice for dogs. His study found that dogs fed a plant-based diet had fewer health concerns and needed fewer vet visits than those fed a raw meat or conventional meat diet.

We hope that this encourages you and your animal companion to try a vegan lifestyle for the month of November and that the benefits you’ll experience along the way will be enough to stick with it long-term! And if you and your dog are already vegan, why not take this opportunity to spread the word? Remember, the more, the merrier!

If you’re looking for a great place to start, give PawCo a go! Our starter pack offers an easy way to transition your dog to a healthy, balanced, plant-based diet (and you get 50% off your first order!) Place your order here and enjoy a delicious, healthy, Vegan Month together with your furry friend!