Did you know your pet can help protect animal welfare? 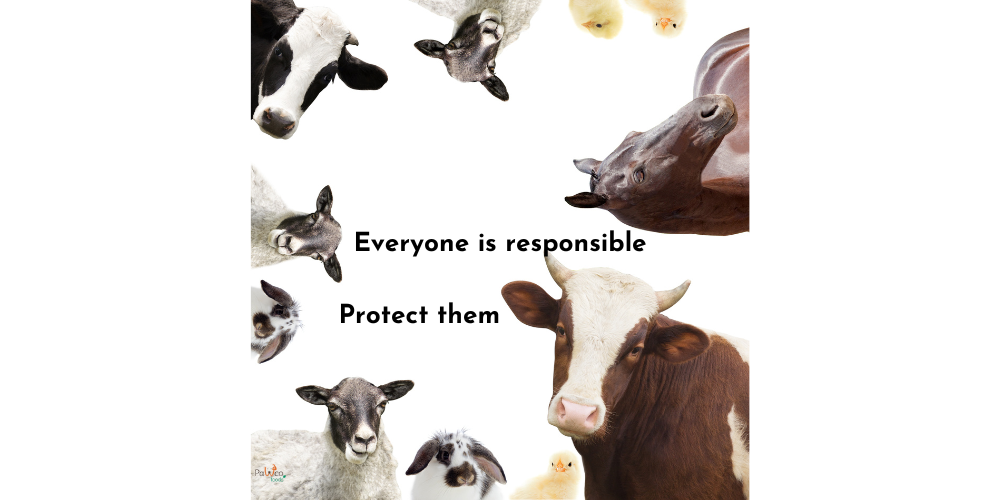 By choosing not to eat animals, humans can contribute to reduced animal farming and slaughter. According to calculations by Counting Animals, a vegetarian human saves about 404 animals annually, which is fantastic! That’s more than one animal a day! However, if you’d like to contribute even more, why not include your furry friend in the cause?

We’ve previously written about the effects of the pet food industry on the environment, but how about animal welfare? According to the Animal Legal Defense Fund, about 9 million animals are slaughtered for food every year, and pets are estimated to consume around 20% of the world’s meat and fish. So let’s do some calculations! How many animals could be saved if our four-legged family members were fed plant-based instead of meat-based meals?

Let’s assume an average-sized, meat-eating dog consumes 10-15 lbs of beef per month, which adds up to 120-180 lbs a year. Based on a rough estimation, we get around 500 lbs of meat from one cow, which means each vegan dog would save one cow every ~3-4 years. That might not sound like much, but consider the number of pets around the world!

It’s estimated that in the US, we have around 90 million pets, 70-80 million of which are dogs. Worldwide, the number of pets is about 500-600 million. Imagine how many animals are killed to feed them all every year! If we could switch only 10,000 of those dogs to a plant-based diet, it would make a significant difference. Let’s take a look:

Now, consider the conditions in which those 2,400 cows would be raised. The pet food industry is not known to be kind to animals, and the conditions under which animals are farmed for meat are often questionable at best. Animals are often kept in small cages or spaces and fed poor-quality food to reduce costs and increase profits. And the meat used for pet food is typically not the best cuts of beef that come out of the factories, but rather the “leftovers” deemed unsuitable for human consumption. In a 2016 study, talking about the hazards of commercial dog food, Dr. Andrew Knight stated:

“These include significant quantities of abattoir products condemned as unfit for human consumption, such as “4-D” meat (from animals that are disabled, diseased, dying or dead on arrival at the slaughterhouse), labeled using terms such as “meat derivatives” or “by-products.”

Let’s also consider other benefits of a plant-based diet. For one, the pet food industry significantly impacts the environment. In fact, one study found that pets are responsible for about a quarter of the environmental impacts of meat production through their diet. A 2010 study by Mekonnen and Hoekstra claims that producing bovine meat uses 15,415 liters of water per kg of meat, and according to the Water Footprint Network, the water footprint per gram of beef protein is 6 times larger than for pulses such as soybeans or peas. And in addition to reducing water use, a plant-based diet can also contribute to reducing land use and deforestation. Large forest areas are converted to farmland to make room for pet food production. A land area roughly twice the size of the UK is used annually to make dry foods for pets.

In addition, a plant-based diet may be the healthiest choice for dogs, according to a recent study by Dr. Andrew Knight. In the study, dog guardians reported their observations of seven key health indicators. The study concluded that vegan dogs needed fewer vet visits and had to resort to non-routine medication much less often than non-vegan dogs. Dr. Knight stated: